The rise of DeFi protocols coupled with the demand for tokens in liquidity pools might be contributing to a major surge in the supply of stablecoins. Based on a September 3 tweet from Coin Metrics co-founder Nic Carter, today’s supply of stablecoins Binance USD (BUSD), USD Coin (USDC), USDK, Tether (USDT), USDT_ETH, Dai (DAI), HUSD, Paxos Standard Token (PAX), and USDT_TRX has been surging by about $100 million per day for the last two months.

“Everyone got so excited about DeFi no one pointed out that stablecoins have been adding $100m/day since mid-July. DeFi yields/interest rates are clearly a vacuum sucking in a lot of stablecoins.” 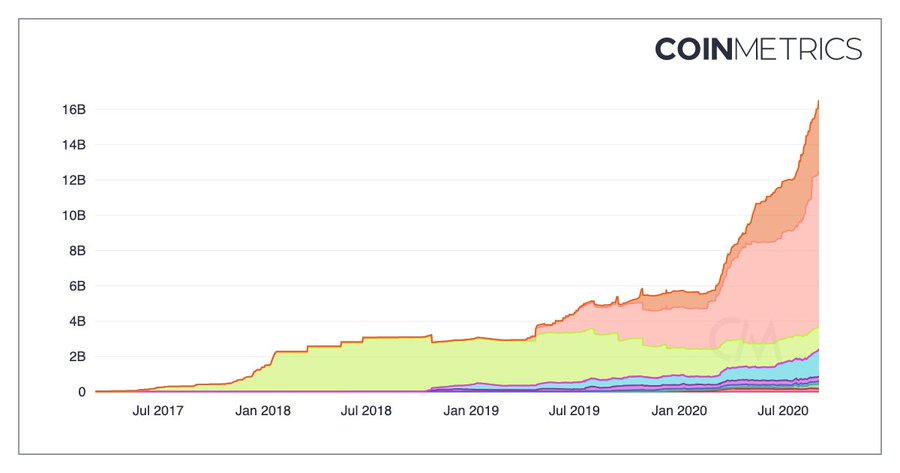 Currently, stablecoins are popular among the tokens used in liquidity pools for DeFi protocols that have been popping up in increasing numbers in 2020. They are also offering larger and larger yields in the competition to attract locked funds. USDC and DAI are also the most borrowed and lent stablecoins in the Compound protocol. Also, they are the most borrowed on Aave.

Nonetheless, Tether (USDT) still holds 80% dominance over the stablecoin market. Based on data from CoinMarketCap, the cumulative market capitalization of Tether increased from $9.2 billion on July 15 to more than $13.7 billion currently. That represents a jump of almost 50%. USDT’s trading volume has increased by about 150% in the same period. It moved from $21.9 billion to over $54 billion as of this writing.

Regulators are starting to take notice of the thriving sector. Bank of England’s governor, Andrew Bailey, said that stablecoins may provide some useful benefits for UK investors. Some of the benefits include reducing friction in payments. But, the governor warned that the coins:

“must have equivalent standards to those that are in place today for other forms of payment types and the forms of money transferred through them.”

Bailey also said that there is a need for coordinated international regulations on stablecoins:

“A global stablecoin is a cross-border phenomenon. It can be operated in one jurisdiction, denominated in another’s currency, and used by consumers in a third. The regulatory response must match this.”